Whole Foods to *Finally* Offer Digital Grocery Pickup: Two weeks ago, we wrote about Walmart’s partnership with Waymo, where they’ll shuttle customers to the store to pick up their groceries on top of already offering online grocery pickup in at least 1,800 US stores. Well, Whole Foods must have gotten jealous and quickly decided “hey, maybe we should do a digital pick-up option?”, which is great because shopping there is outrageously expensive anyway, so this should be a nice perk. And since they’re owned by Amazon it’s oddly surprising that this took so long (looking at you, Jeff Bezos). They are kicking off the service in Sacramento and Virginia Beach, the New York Times reports and this late move by Amazon comes as they go head-to-head with Walmart to hold power over the shifting retail landscape in America.

Snapchat Loses Nearly 3M Users: Hm. Who saw this coming? All the profits and losses from Wall Street aside (because again, I don’t understand any of that), we all know this is because of the update they released earlier in the year that completely flipped the app on its head and people were pissed. TechCrunch quoted CEO Evan Spiegel in his attempt to explain the downturn in users and profits, basing it on “a slightly lower frequency of use among our user base due to the disruption caused by our redesign.” NO WAY. I can’t find my snaps nor can I locate any of my friends’ stories so yes, you are right, Mr. Spiegel.

Instagram headquarters is probably full of dancing techies right now because their daily number of stories tops out at 400 million and WhatsApp Status now has 450 million. I am so excited to see what Snapchat does with this information – I hope their solution is to pull a total 180 and go back to the way the app used to be. A girl can dream.

NYC Deals Lyft & Uber A Bad Hand: This Wednesday, the City of New York announced they will be halting new vehicle licenses for ride-hail services. This is a major setback for Uber, because NYC happens to be their largest US market, reports the New York Times. The reason for this, you ask? Well, they want to rein in the market. Literally, they are trying to analyze the sharing apps and how they affect cities – whether good or bad – so we’re going to call it going through ‘checks and balances’, the good ol’ American way.

They will also be looking to set a minimum pay rate for drivers. It has also come out, which is news to literally no one, that local well-established taxi companies are not happy about this because it is taking away from their business. Which is obviously because people value convenience over local business – sorry ‘bout it. This ban on new licenses will only last for a year while the city gets its sh*t together so we shall see what happens next August.

Roku’s Advertising Outperforms Hardware Business: Connected TVs are now a household name (literally…). Apple TV, Roku, you get the picture. As of late, it appears Roku is working to out-advertise their competitors as opposed to out-technology them which, if true, is a strange approach to take. As an advertiser myself, I obviously know the importance of branding, but you have to have the goods to back it up. In the first quarter of 2018, reports Digiday, Roku’s platform revenue – which includes its advertising revenue – surpassed revenue from sales of its connected TV hardware. And if that isn’t enough, the gap widened even more in the second quarter! Wow. They are rolling out more than enough means to make money from advertising, obvi. The money is coming from video ads it sells on ad-supported channels that active account holders can watch through their devices.

Starbucks Secretly Announces Debut of Pumpkin Spice Latte: Wow, talk about breaking news. Starbucks ‘internal documents’ were leaked online by employees and the debut date is…drum roll please…August 28. Which happens to be my birthday and I may actually go treat myself to one, or maybe use my free birthday drink. Regardless, I will have to be as basic as I can and go get one.

In addition to the PSL coming back, the Salted Caramel Mocha & the Teavana Pumpkin Spice Chai Tea Latte, reports Business Insider. The big deal here is that usually the PSL is released in September but this year they’re debuting it a few days shy of labor day weekend aka the end of summer. *sheds a tiny tear*

Here’s a pie chart created by Business Insider for you to see just how big of a deal this is: 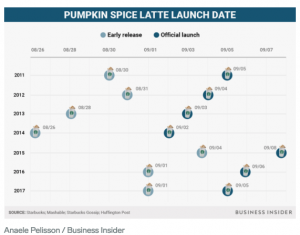 Tune in next week for some more fun industry news!