Just Because You Can, It Doesn’t Mean You Should

The title says it all. Those dreaded words have been uttered by many a parent, with the general goal of keeping your childhood self from doing something silly that you really wanted to do, but they knew you shouldn’t. This phrase is likely only trumped in the parental handbook by the phrase, “If so and so jumped off a bridge, would you do it too?”

I must admit, I have used the title phrase quite a bit in my career. The main difference is, I’m usually talking to a client, and I am, of course, referring to using a green screen. Just because you can, it doesn’t mean you should. 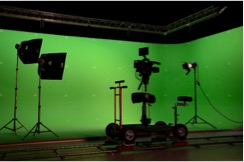 What is a green screen? It’s a wonderful production tool that has been around for some time. It allows you to place people and objects, real or imagined, into environments that may also be real or imagined. Used properly, it can transport you to worlds, or help to achieve shots that would either be impossible, too dangerous, or flat out too expensive to achieve in any other way. Used improperly, well, let’s just say that it can provide a cheese factor to a production that would embarrass even the Cheetos Cheetah. Unfortunately, green screening is one of those techniques that I see misused the most, especially in advertising. How many times have you seen a local business owner green screened badly into a shot of the front of their own business? If you’ve seen it once, it’s already too much. Shooting such a scene for real is not only quite practical, but it would also look much better.

The green screen should be used to enhance a production when necessary, or when a concept calls for a shot that isn’t otherwise achievable. In other words, there should be some specific reason that it is used. Shooting green screen simply to avoid the effort of being on location to shoot a perfectly practical scene is the mark of the inexperienced. I regularly see producers and creative directors use green screening as a crutch for when there isn’t much of a concept for the shoot, or as a method to keep shoot costs down, as studio shoots tend to be less time consuming than shooting on location. The problem with this practice is that without a real plan for shooting on green screen, the process of post-production becomes far more time consuming and expensive, as ideas must be built around whatever footage happens to come out of the shoot, good or bad. The post-production costs associated with this “make it up as you go along” approach often tends to completely negate the lower cost of the shoot itself.

Our studio invested a fair amount of money in a partial wrap around green screen for effects work. Odd as it may seem, we spend a fair amount of time talking clients out of using it. We prefer to shoot a scene for real, if possible, saving this tool only for when the shot calls for it. Our most creative visions often call for some form of green screening. Everything else can and should be achieved the “old fashioned” way…by being on location and taking the time to shoot it properly.

Shoot on a green screen when necessary, not because you can. If I green screened you onto a bridge, would you jump? You would if the shot required it.

Things I Learned from my Old Man Cooking with Facebook