Google is Tracking Your Movements, For Real: I don’t know if this is surprising or not to most of you but yes, Google has officially made a statement saying they do, in fact, record your movements even when you have told them not to. Tsk Tsk, G. According to an investigation done by the Associated Press, and confirmed by researchers at Princeton, many Google services on Android and iPhone devices store your location data. Hmph. There are upsides to this, of course, like in instances where the police have been able to use this information to track down criminals, but the majority of us are not criminals so I would like Google to do some ‘splainin. Their explanation was that you can turn off Location History at any time, which is true, but some Google apps automatically store time-stamped location data without asking.

Wired.com has put together some steps for how to turn this feature off, read on here.

TSA Tests Scanners That Will Make Security Much Faster: “Please remove all liquids and electronics from your bags and place them in one of the bins provided”. How many times have you heard that? So many that you could recite it in your sleep? Same. The Transportation Security Administration (or TSA) has been testing at a few airports across the country new types of scanners which allow you to leave everything in your luggage. Whoa. The new scanners resemble those of 3-D imaging equipment that you’d see if you had to go get a CT scan, the Washington Post reported this week. TSA officials will be able to rotate items on three separate axes, which is a big difference from the current 2-D systems they are using. So that means you’ll have to leave about 20 minutes later than you normally do because we all know how annoying it is to have to remove all that stuff from your bag!

TSA plans to slowly roll out this new system, saying that they’ll be trying to install about 40 units by the end of this year and 145 by the end of FY 2019, the Washington Post reports.

Amazon is Once Again Looking to Expand its Reach: Bloomberg reported earlier this week that once again, Amazon is reaching its claws into different markets (hello, Whole Foods). As if they don’t already control most of the world, they are in the running to purchase Landmark Theaters, which is currently co-owned by Mark Cuban and Todd Wagner. No decisions have been made yet and they could still fall apart but the 50 theaters in 27 markets could see some seriously cool upgrades, should Amazon win the bid.

Netflix was also mentioned in the running to purchase Landmark, which would be a big win for them as well. Either way, it could have a huge impact on the digital landscape and the brick and mortar movie business as well.

America Lags in Paid Time Off: PTO, paid time off, vacation – whatever you call it, Americans are seriously undercompensated versus other countries when it comes to paid time off, CNBC reported on Wednesday. The report shows that the U.S. is the only advanced economy which does not guarantee its workers any paid vacation time. Statista compiled a chart showing the discrepancies in vacation days between countries across the world and let me tell you, it is astonishing. 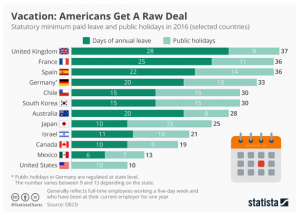 Can you imagine having over 30 required days off every year?! That would be great. The main reason most companies/countries do this, however, is to maintain a work-life balance for employees. Point being, the happier and more relaxed you are, the better your quality of work product will be which honestly makes a lot of sense. People who are tired and run down typically tend to be less productive and motivated. If there is any sort of silver lining here though, it’s that more people are using their days! CNBC says that the average vacation time is 15 days per year, does not meet the minimum amount required by law in 19 of the world’s richest companies.

If I were to run for president, my platform would be to have at least 25 vacation days per year. #Beyer2024

Girl Scouts Announce New Flavor: just like I wrote on Starbucks’ announcement of the PSL debut last week, this week I’m writing to all my cookie lovers – there’s a new flavor coming to your doorstep. Caramel Chocolate Chip is the big hitter they are debuting, it is comprised of caramel, semi-sweet chocolate chips, and a hint of sea salt. Here’s the kicker: it’s gluten free which means people of all diets can enjoy it.

These will debut next year during peak selling season. I know I’ll probably be ordering at least 2 boxes, on top of my normal Tagalongs and do-si-do order. On top of being known for their cookies, the Girl Scouts are encouraging leadership development amid advancements in technology, biz and politics, Fortune reports. Order up, people, the cookies will only be getting better from here.

From Naming Nail Polish to Creating Ad Campaigns, Our Brains Come Up With A Lot of Cool Stuff Epic Story Telling