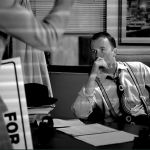 Too often, individuals and corporations get stuck in a certain look because “That’s the look that everyone else in my industry goes with.” We see this most often in well-known industries…doctors wear white lab coats and look at x-rays, bank loan officers sit at computers and talk with people, real estate agents parade a couple through a house, etc. Certain industries have understood imagery and practices, I get it. It’s not that there is anything inherently wrong with these things, but to me, it looks as if someone at some time in the past framed a few shots of what they thought people in a particular profession did, and everyone else simply said, “Yes. That is what a banker does. Yes, that is an image of a realtor at work. Our TV ad should look like that too.” The goal in TV commercials, especially in your local market, is to stand out. Video is an incredibly effective medium, but for it to be at its most effective, it must cut through all the other noise, and it should be as polished and creative as possible.

Take our version of a real estate ad, for example. Everyone knows what a realtor does, and many agents advertise, so how does one go about producing an ad about listing a home with an agent that will stand out from the crowd? How about a short storyline about many of the problems people who try to sell their own homes encounter, but produced in the style of film noir? With a little scripting and creativity, you get “Agent Noir”…not your typical real estate ad, yet, within the storyline, we were able to work in all the things that the realtor wanted people to know about the pitfalls of trying to sell their homes themselves.

Political ads are another genre that tend to follow a formula. Have your candidate talk with people and deliver the message on camera…perhaps animate a few photos. That’s fine, but what if we used metaphorical imagery to illustrate the message to the viewers? One of our clients, who was running for judge, decided that he would like something different. His message was that he would work hard to get criminals off the street. This is a pretty typical message for a candidate running for judge, and as such, it has been put into a television format before.

For most production teams, this means shots of jail cells, criminals behind bars, and judges hitting their gavels. For Wheelhouse’s production team, this meant that we needed an atypical way to illustrate a typical message. Take bit of outside the box thinking with a little visual effects magic mixed in, and you get the “Safe Streets” ad. The visual message is simple. The crimes that would have been are prevented by electing a particular candidate for judge.

Producing ads that are outside of established industry norms may be outside the comfort zone of many clients. That’s understandable, but as

the saying goes, “fortune favors the bold.” The Wheelhouse production team is not afraid to push the envelope of creativity, and when you couple that with the sheer ability we have on staff, the results can be wonderful. If your goal isn’t to stand out, why bother at all? Of course, not every ad has to be a visual effects bonanza. Sometimes, a message presented with simple imagery can be quite effective…just ask Brian Prim how proud he was of his “Load of Bull” ad. Simple. Clever. Effective. Let us help you to stand out. 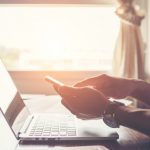 Social media is everywhere. With Instagram being a huge player in the game we wanted to walk you through some of the best tips and tricks for your page.  Instagram is essentially a social atmosphere where you can create and promote your brand and image for your business. Below is a list to help you… END_OF_DOCUMENT_TOKEN_TO_BE_REPLACED