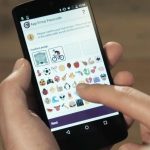 The Emoji keyboard was first introduced to Americans in 2011 in an Apple iPhone update. Before they were a big hit in the U.S., Emojis were popular in Asia, particularly Japan, when Shigetaka Kurita developed them in 1999! Today, we see emojis everywhere, and even see them included in U.S. marketing strategies and campaigns. Since 2015, brands’ usage of emojis in email and mobile marketing has increased by 777 percent!

May I remind you that we still have three more months left in 2016.

The emojis help add humanization to marketing campaigns. I, and I am sure readers, have seen emojis used in Chevrolet advertisements, Domino’s Pizza’s epic way to order with a pizza emoji on Twitter and even on the latest Ellen Show commercial. There’s even a National Emoji Day on July 17. While companies are utilizing emojis to help humanize their brand, there are differences between the emojis that the public prefers and the emojis that the business world prefers: 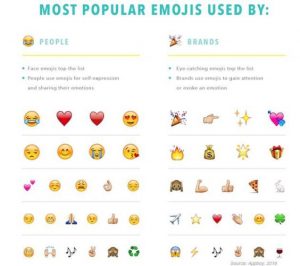 While the world is being taken over by the use of emojis, I cannot help but wonder if there is such a thing as emoji etiquette. When is it wrong to use emojis in marketing? Are we using emojis the way in which the Japanese founder intended them to be used when he created them in 1999? Let’s find out!

When is it wrong to use emojis in marketing?

The famous saying of “less is more” is something to keep in mind when marketing with emojis. While some use of emojis do require more, there is a tasteful way to do so without annoying fans of the brand.

Check out these two examples from Social Control: 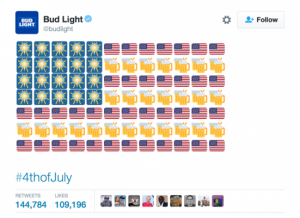 Clearly the Bud light tweet is the more favorable usage of emojis.

Are we using emojis the way in which the Japanese founder intended them to be used when he created them in 1999?

The Japanese have typically used emojis to offer a better and more polite method of communication through online/digital media outlets. A lot of emojis represent themes from the Asian cultures that allow for “language play” and “cute culture.” In my opinion, we are using the emojis in a fun and appropriate way when it comes to marketing, however, others may think different.

According to the following chart, brands that are using emojis in their marketing campaigns come off as “fun” to consumers of all ages and genders. 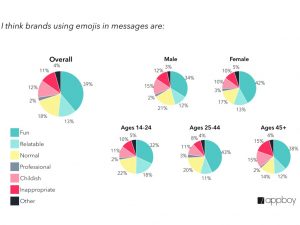 If you’re thinking about using emojis in your marketing strategies, I would suggest you read The Rise and Rise of Emoji Marketing.