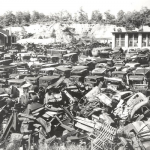 My old man was a junk man his whole life. He started out as a rag picker in 1929 when he was 13 years old. He would pull a wagon through the streets of North, East, Center and South Wheeling, as well as the Island, Claytor, Elm Grove and Woodsdale, calling out for rags. These rags would be added to a giant hopper, shredded and sent to textile and paper mills by rail. I asked him once if he felt ashamed pulling that wagon. He quickly said, “Hell no. I had a job. It was the Great Depression. Many had it rougher than I did.” 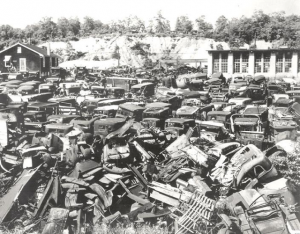 By the age of 18, my dad worked his way up to scale operator in the scrap metal part of the yard. This was the most coveted job in the whole junk yard. People would give the scale man gifts, little favors in hopes that he would weigh their loads a little heavier than they actually were so that they could get more money. It was not uncommon for a scale man to fake the load weight and then demand part of the over payment as a kickback. My dad decided he wasn’t going to do that. Even at 18 he was no pushover. He made it clear from day one that he would accept no gifts and everyone would get a fair weight.

He knew he could do this job. He could do the math in his head. He knew metal and he knew how to deal with people. He was not at all worried that he would fail, but he wasn’t sure that would be enough to keep that coveted position. He needed an edge.

Believing that doing a good job was not necessarily good enough to keep a job during these though times, he wanted to do more. He wanted to impress his bosses and try to assure his job placement. He came up with an idea wherein he could buy bulk graphite, pour it into paper tubes and sell it to the folks who came in to sell their junk. He approached his boss and asked if he could start doing this. He told them he figured that everyone of their customers would buy the graphite because every one of them had a use for it. He said he could sell it for 10 cents a tube cash, or 5 cents a tube if they took it in trade with every load they brought in. His bosses said that they didn’t think they were interested because people might think that they were trying to extort patronage from their customers. Instead, they told him he could run it as a side business while he was also working for them.

Eventually my old man was selling tubes of graphite all day long. Still wanting to show his self-worth to his employers, he came up with another idea. He figured that just like the graphite, oil was something his customers could use, too, as were tarps and tie down straps for the trucks carrying the loads. So, one day, he approached his bosses. He told them how well he had been doing selling his graphite and said that he was sure he could sell oil, tarps, rope and even chain. He said that customers could bring in their own oil cans and he could fill them from the oil drums in the yard. He said that they could salvage old chains from the junk and have their welders put hooks on them. This would be money for nothing. The ropes and tarps they would have to buy wholesale. Before they could say no, he pulled out a wad of money – all he had made selling graphite. He offered the money to them and said they could use that money to purchase the materials.

The bosses thought it over and asked him what he wanted in exchange, or what he hoped to gain. He said that all he wanted was to get to remain the scale man and to be assured a job. They took his money, and agreed to his new idea. Soon the scale room looked like a store front. They sold all kind of necessary items to the men who brought in scrap for cash. They also kept the profit. My dad didn’t get a cent of that money.

Then one day in December of 1944, the Japanese bombed Pearl Harbor. The next week, my dad and his cousin walked into a recruiting station and joined the Navy. Soon he found himself in the South Pacific on an LST. He saw much action in those campaigns. Many died around him. Fear was a constant companion, but one thing he never had to fear was whether his wife was doing without, if she was going hungry or in fear of losing their home. This was because his employers back home never failed to deliver a paycheck to his wife. Even though he was not there, even though he was not working for them, they paid him every two weeks and delivered that check in full to his wife.

When my dad got back from the war, he went back to his old job. He thanked them for not only keeping his job open for him, but for sending a check to his wife every two weeks for two years. He swore that he would pay them back for every cent. They told him that he had already paid it back to them. They informed him that they not only made money selling merchandise that they never would have sold had it not been for him, but that there was a bigger reason that they had never told him about. It seems that soon after my dad took over the scales, the company found that their scrap intake weight, their weigh in, was down, but that their outgoing, or weigh out had stayed the same. It took them a while to figure this out, but eventually it all came clear. Every scale man before my dad, had cheated the company by claiming weigh ins were higher than they were. They did this to get kickbacks from the customers. All my dad did was mark down the exact weight, and pay out accordingly. This money added up, so much so that when my dad was in the Navy, his employers continued to pay his wages to his wife.

My father worked there until 1967. The last of the three Laffer brothers, for whom he worked his entire life, had passed away by then, and my father no longer felt obligated to stay. I remember his boss at his new job gave him a brand new car as a signing bonus. It was a 1968 Olds Cutlass, the first and only new car he ever had.

My old man was a smart man with a great work ethic. It is my hope that not only some of that rubbed off on me, but that perhaps some of that can rub off on my fellow compatriots here at Wheelhouse.

← What Will My Video Project Cost?
Just Because You Can, It Doesn’t Mean You Should →