Sometimes it’s hard to come up with blog topics. I inquired with Carrie Scanlon, the resident crazy idea lady, when she informed me of the unthinkable: bubble wrap is being discontinued. Wait, what? Bubble wrap is being discontinued? Say it ain’t so! A quick Google search debunked Carrie’s theory (of course), but it did get me thinking about a bubble wrap-related story that happened to me this Christmas season.

This, ladies and gentleman, is the Kate Spade Teakettle Saga. 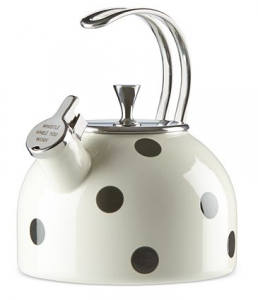 It was Dec. 5 at Macy’s in Downtown Philadelphia. I was having a minor meltdown amidst the massive amount of shoppers crowding every nook and cranny of the housewares department when I saw the perfect gift for my older sister, Tara: a Kate Spade teakettle. It was white with black polka dots and probably the most adorable kitchen utensil I’d ever seen. I was ready to stand in the checkout line for what I assumed would be about five hours when my fiancé, being as supportive as ever, said, “She doesn’t need that. She can make her tea in her Keurig.” Deflated, dejected and very much not in the Christmas spirit, I put the teakettle back.

I thought about the teakettle all night. I looked at pictures of it on my phone while Jade watched football in the hotel. I had to have it.

As luck would have it, there was a Macy’s on our way back to Ohio that had the teakettle in stock. We pulled into the parking lot and I promised we would only be in there for a few minutes.

You shouldn’t lie at Christmas.

We walked into the housewares department and, lo and behold, no teakettle. “We have three in stock,” one employee told me. “They’re probably in the back,” said another. Would you believe we didn’t find a single teakettle that day? If you don’t, you better start believing. All was well that Sunday afternoon, though, as the manager ordered me the teakettle and waived the expedited shipping fee. It was set to arrive a few days later. I was pleased. 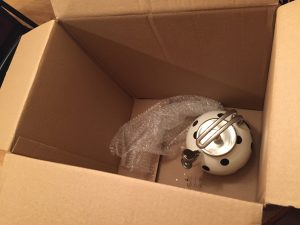 The teakettle turned up on my front porch in a box way bigger than necessary the following Wednesday. Upon lifting it, I could hear and feel the enameled beauty moving around. Not giving it a second thought, I tore open package and was stunned at what was inside.

One piece of bubble wrap. One. Not even the heavy-duty kind and not even wrapped around the teakettle. Really?

It was the saddest thing I’ve ever seen. The beautiful teakettle was scratched, dented, chipped, literally falling apart. I popped open the spout and a spring and a screw flew off. I clearly couldn’t let Tara open this on Christmas morning.

A few days later, I returned the severely damaged item to my local Macy’s. They were very apologetic and accommodating and ordered me another teakettle, waiving the expedited shipping fee once again. I was told to expect it within three to four days.

This Christmas season, I learned never to expect anything.

I received an email from Macy’s the day the teakettle was to be delivered. “Your item is no longer available.” Excuse me? You mean to tell me that not a single Macy’s in the entire world has that Kate Spade teakettle with the black and white polka dots? Yeah, right, that’s not gonna fly. Since Jade is the mean one, he was on the phone giving Macy’s Corporate a stern talking-to within a few minutes. As luck would have it, they located a teakettle for him. Guess where it was from?

The place I had originally seen and was an inch away from purchasing it two weeks prior. 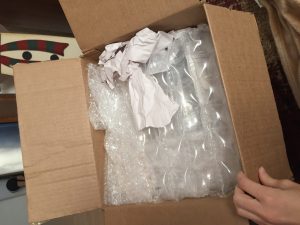 The order was placed on the Friday before Christmas and arrived promptly two days later in an appropriately sized box. I didn’t hear any initial clinking or clanking around when I shook it. I opened the box and, good Lord, I’ve never seen so much bubble wrap in my life. They used the heavy-duty kind this time and even threw in some packing peanuts. Now that’s the Macy’s customer service I know and love. Tara opened her Kate Spade Teakettle on Christmas morning and adored it just like I knew she would. She also informed me that she already had the matching hand towel hanging in her kitchen. How perfect!

In the end, it was all worth it. After all, I probably would’ve never come up with a blog topic had it not been for the most irritating, rewarding and bubble wrap-laden (or lack thereof) Christmas shopping experience of my life.

The Simple Life, a Blog on Modern Survival I’d Rather Jump the Snake River