Look ‘Em in the Eye

A while back, I worked on a video that required the subjects of an interview to talk directly to the camera. The people being filmed weren’t paid actors or on-air professionals and you could tell they felt uncomfortable speaking to the lens of my camera and you can’t blame them. 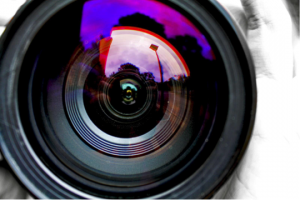 With some coaching and a few extra takes they grew slightly more comfortable, but they were never as relaxed as they were before we started filming. We eventually got the subjects to relax enough to tell their story, but often times the shooting schedule doesn’t allow for as many takes that’s needed to pull off this technique.

Now, of course, the simplest solution to this problem is to have your subjects not look into the camera, but to be honest, that can be quite limiting. In my situation, the project I was working on was a video honoring a beloved employee who was retiring, so I wanted it to feel as if the testimonials given were being said directly to the person of honor. This interview technique is prevalent in modern day advertising and entertainment.

Go to YouTube and look at what videos are trending. What’s one thing that helps make those videos so popular? The answer is that the speaker looks the viewer in the eye. From the days of Billy Mays’ OxyClean commercials to the viral video for Dollar Shave Club or even the very popular Old Spice commercial, the on screen talent speaks directly to the customer.

“If you’re a customer and you speak to a salesperson, do they look over your shoulder and just talk about themselves? Of course not. ” – TubeBuddy and Hey.com

According to a recent study by TubeBuddy and Hey.com, videos that have the talent speaking to the audience and looking at the camera are much more effective as opposed to videos where the talent is looking off screen.

Ironically, what seems unnatural during production, ends up creating a very natural and engaging final product, connecting you to the viewer.

If you’re the President of the United States or a news anchor, a teleprompter is used where the words from the speech or news script is projected onto a reflective glass in front the camera’s lens. While reading the script, the eyes focus on the words crossing over the lens giving the appearance that the speaker is talking directly to the audience. 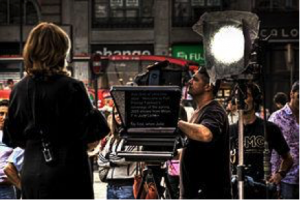 A teleprompter, for the most part, is only helpful with scripted productions and won’t help you during interviews.

So, how can you pull of this look quickly when your talent is not used to talking to the camera?

A few companies have come up with some interesting and innovative solutions to this problem, the first one coming from the company EyeDirect. They have created a photographic device that guarantees contact from any subject. According to EyeDirect’s website, their products will “guarantee an authentic connection”. Here’s how it works:

EyeDirect “How does it work?” from Steve McWilliams on Vimeo.

It’s essentially a sideways periscope that will overlay the interviewer’s face in front of the lens, naturally drawing the eye of the subject to the camera, whether it be a professional actor, business owner or your dog.

Whatever method you choose to use, the important thing is that you need to engage with your customers. Use video to start a conversation with your audience. Speaking directly to them shows that you care about each one of them individually. They know they can trust you, because you’re looking them in the eye.