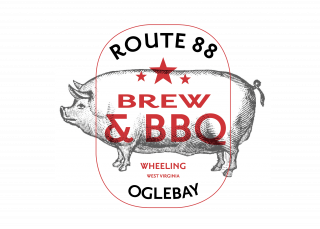 It starts as you walk toward the building. From the parking lot you detect the wonderful tang of wood smoke and smell of meat cooking. Then as you get a little closer you actually see the smoke, and if you are lucky you might see the master chef himself carrying in a tray of beautiful beef brisket that has been in the smoker for the last 16 hours. People walking in have an excited look on their faces. People walking out all share a similar contented smile. You have arrived at the newest hot spot in Wheeling and are about to enjoy the divine goodness known as the Route 88 Brew & BBQ.

In my neighborhood (the Wheeling area) our idea of barbecue is either a charred dog or burger cooked over hot coals on the home grill, or maybe some sloppy, salty, MSG filled piece of processed meat at one of the local national chain restaurants. Neither sounds all that appealing to me. Then I heard about the Route 88 Brew and BBQ at Oglebay’s Par 3 and driving range. Just the thought of an actual barbecue joint in my area made my mouth water. But for me life is not that easy, at least when it comes to dining out.

I have Celiac Disease, an auto immune disorder that means my body cannot tolerate gluten, and gluten is in almost everything in America. So, no matter how rewarding the thought of local barbecue sounded, there was no way I was going to try it out. Eating gluten doesn’t just make me uncomfortable and bloated. It makes me very ill, and for a very long time.

One day a friend invited me to lunch at the new barbecue joint. I declined on the grounds of gluten. Not one to take no for an answer, my friend called the restaurant, and asked them if they had anything on their menu that would be considered gluten free. Chef Jeremy told her that all of his meat products, dry rubs, sauces and side dishes were 100% gluten free. The only things he suggested as being out of bounds for a gluten free person would be the buns, Texas toast and possibly the fries. So, I decided to give it a go, and now I am such a regular customer that Chef Jeremy and I are on a first name basis.

Those of us who eat gluten free have developed this sort of test that tells us if the food served is actually gluten free, or if we are about to be sick. It goes something like this. If the food tastes too good to be true, it probably has gluten in it, and we are about to die. That was my thought when I first tried Chef Jeremy’s barbecue. It was so good. My mouth watered at the smell, and by heart leaped at the taste, and that was without any of his hand made sauces. When I added his spicy sauce to my pulled pork it was as if all my troubles melted away. After that first lunch I waited for several hours, expecting all the while to feel the sickness coming on. When all I felt was satisfied, I decided I had found a new favorite safe place to dine.

I would encourage anyone who loves barbecue (gluten free or not) to stop by Route 88 in Oglebay for some of the best hand crafted, artisan-based barbecue in the world. Let me know if you like it. Let Chef Jeremy know if you like it. Then tell everyone you know how wonderful it was and invite them to Oglebay. If you require gluten free simply let them know. You won’t be disappointed. Buy a hat, or a tee shirt while you’re there. Wheelhouse’s own graphic designer, Rick Palkovic designed them. At least pick up a take-out menu. Rick designed that too.