All Roads Lead to Adena 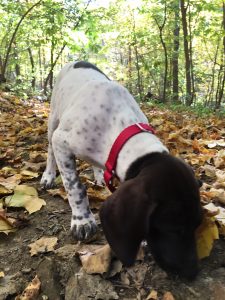 What was I thinking? That’s what I keep asking myself. It all started about a month ago. I was walking into Wheelhouse when suddenly I was bombarded by crazy women pushing cell phones in my face. After some initial blocking maneuvers learned in karate class back in junior high school, I saw that all of these cell phones had pictures of an absolutely adorable German Short Hair Pointer puppy. When I say adorable I am most definitely understating her adorableness. This little girl was cute in a way that only GSP puppies can be. I knew I had just been set up, but I didn’t care at all. I was hooked. Being the big tough man that I am I immediately sought privacy in an adjacent room, called my wife, and asked as sweetly as possible if I could have a puppy. When I described the pup to my wife she said yes. That’s when the trouble began.

The mother of one of my Wheelhouse teammates has something to do with a local animal shelter. This puppy was brought to the shelter and needed a home. Thinking that one of the guys here at the office would want the dog she took a chance and brought her by. To my good fortune, he did not want the puppy. That’s when they decided to sick her on me. It only took one look. I had to have this puppy. A few hours later, my wife was driving away with our latest addition and we haven’t slept since. I have tension in my neck and arms. My hands look like an old sieve from needle sharp puppy teeth and my nerves are shot. What was I thinking?

Somehow I didn’t think my other two dogs would mind having a puppy around, after all she was so cute. Boy was I wrong. Bringing a new dog into the house changed everything. My oldest dog, Bratchie (a blue tic beagle mix), was at first indifferent, then jealous, then offended. My biggest dog, Rucker (a black mouth cur), was scared to death of this little demon. This fear quickly shifted to aggression, with the problem being that Rucker’s head alone is bigger than this little puppy’s whole body. One bite and this little girl disappeared and it was never just one bite. Rucker started terrorizing the pup. From there things only got worse. One morning we had to rush the puppy to our vet to fix her bloody head. As it turns out, puppies are very resilient. The vet cleaned the wounds and sent us home. No harm no foul. 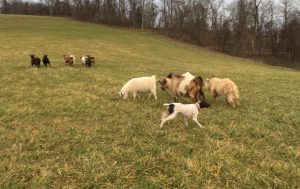 As it turns out, my wife’s cousin is a dog trainer and pet psychologist. I know, what in the world is a pet psychologist? Well, it is someone who studies your pet’s behavior, then tells you what you are doing wrong. This wasn’t about me. It was about my crazy dogs, but what’s a guy to do? So my wife contacts her cousin and tells her what had been going on and about the attack. After about an hour of back and forth emails, my wife comes in the room and tells me that I have to start teaching my older dogs tricks. That’s it, teach my old dogs tricks. I thought the woman was nuts, but I did as I was told. Sit, stay, lay down, give me paw… big deal, and what a waste of time. Oh, and don’t watch TV, play with the old dogs instead. Crazy, right? Well, as it turns out she was right. Seems my old dogs felt left out, neglected and unappreciated. Within a few days our house once more knew peace, sort of. We still had the puppy, but the fighting was over. 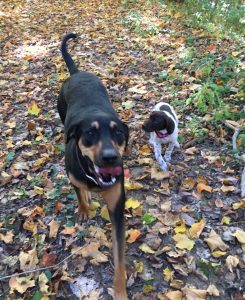 Now I have a wall that has to be repapered because this wild child puppy thought it would be a good idea to eat wallpaper. I have to replace carpet in one room, maybe two. We decided to cage the pup at night and when we are away. To show us how much she loved the cages she decided to chew the carpet all around the cage walls. I have a hard drive that I keep all of my business information and photographs on. The puppy decided to pull it off my desk and chew it to pieces. I’m waiting on repair parts as I type this. Everything that as much as touched the floor has been chewed to pieces, but hey, she is adorable.

At Wheelhouse, we have been adding people to our staff on a fairly regular basis. I realize that people aren’t puppies, but we do share in some of the same behaviors as our furry friends. There have been no fights and I’m pretty sure that no one has been bitten, but because of my new puppy I am much more sensitive to the needs of my fellow teammates and friends here at the office. It is easy to feel unwanted or under appreciated. It can sometimes hurt when everyone dotes on the new guy or girl no matter how adorable they may be. It’s a good thing they have me here to serve as trainer and psychologist. I’m teaching everyone to sit and stay and a few can even rollover. OK, maybe I’ve gone too far, but these folks at Wheelhouse are adorable…not as adorable as my new puppy, but adorable just the same. By the way, her name is Adena, and she loves me like only a puppy can. She’s a good girl. She works hard.

Life’s a Dance It’s a Giving Time of Year