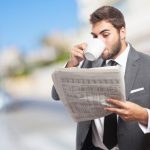 Back in the old days, we had a marketing tool that was perhaps unsurpassed by all others. It was known as print. Print came many forms. There were magazines, brochures, signs and the almighty newspaper. Today, electronic media has replaced, or at least dwarfed, much of the older style conduits for print advertising, but the same rules apply. If you want great results, include good photography.

It wasn’t all that long ago that an article in the newspaper, not an ad, but an actual article, was the best for which you could hope. Newspapers were trusted by their readers, they had legal standards to uphold and the term “fake news” was unheard of. If it was in the paper, it was considered to be true and reliable. Get your name or your company’s name and story in the paper, and you were golden.

In the second paragraph of the Declaration of Independence you will find the words, “We hold these truths to be self-evident, that all men are created equal.” Though I personally subscribe to this thought, no one was ever equal in the press, especially the newspapers. Hot topics got precedence over dull stories. Current stories were pushed to the front, while older news, or less interesting news, got pushed to the back. The challenge for PR specialists and marketers was to get their client’s message pushed to the front, and even better, get it on a cover, and the holy grail, above the fold. Some people only read the headlines. Some only read the cover. This kind of attitude made real estate on the front page, especially above the fold, very valuable. Knowing how to get a message in that coveted arena made a marketer, or in my case, a photographer valuable to their clients.

I was just a kid, starting out in business for myself back in the early 1980s. My first two clients were a hospital and a college. I started with both of them, getting small jobs here and there. I remember walking the halls of West Virginia Northern Community College while delivering my finished photography. I would stop and look at the glassed-in bulletin board where they placed all the newspaper articles that were produced about them. I noticed that the stories they submitted with my photos were more likely to get printed. I also saw that the articles accompanied by my images were longer and more likely to be on the front page.

One day, the president of the college called me into her office. I figured I was about to get fired. I couldn’t have been more wrong. She asked me to sit down, and she laid out about a dozen clippings, all about the school. She pointed out that she was recently made aware of the fact that their press releases were not only more likely to get printed in the paper, but that they were getting much better placement. She then pointed out that upon studying the matter, she discovered that only the ones with my photos were doing well. She told me that the articles they sent without photos were less likely to get printed. Add one of my photos and, like magic, placement was better. She was the first to tell me that the best place in the paper was the front cover, above the fold and that my images helped them get there with a greater success than ever before.

I never forgot this. I started using this story to get more work from my other clients. When they would question my prices, I would simply ask them if they wanted above the fold, or lost in the back of the paper somewhere. Today, things are still the same. Newspapers may not hold the same place of power in our marketing as they once did, but the premise is the same. People are attracted to a pretty or gripping photograph. It is the photograph that grabs the reader. Then they read the message. And if the photo can telegraph the message, all the better.

It makes no difference if you’re in the paper or on Facebook, a better image will attract more interest than none at all. So often that photograph is the first or only impression you get to make. We at Wheelhouse suggest you always make it count. Always include great photography as part of your message. With more than years of professional experience, Wheelhouse photography is a powerful tool that we use daily for our clients. Let us help you get your message above the fold.