The first time I actually experienced raw, brute power was when I fired up my first tractor. It was a 1959 Allis Chalmers D14, bright orange and covered in grease and oil. It was dirty, ugly and beat to crap, but I fell in love with it just the same. To think I almost refused to buy it is almost more than I can take. 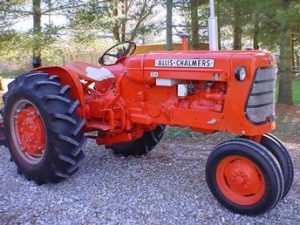 The Allis came with the farm. We were in the process of buying several acres in the country to use as a camp. We had no intent of living there. The place came with a house, a barn, an old tractor and a beat up old Ford F150. My original intent was to tear down the barn and to try to convince the owner to keep their ugly truck and tractor. I remember the woman sitting down in front of me, taking my hands in hers, and saying, “Trust me. You will need both the truck and the tractor.” She was right.

The tractor didn’t work when I first got it and I was about the most un-mechanically inclined person in the world back then. I went on the Internet, searched for instructions and found that there were forums and groups out there dedicated just to this brand of tractor. I first changed the oils – there were several kinds of oil that needed changed. Next came the spark plugs, the plug wires and finally cleaned out the carburetor. I poured in some fresh gas and turned the key. Ever since that day, my old D14 has always turned over on the first try.

Long story short, I bought the truck and tractor along with the farm. The folks living there before we bought the place collected junk, all kinds of junk. That junk had to be moved. In comes the tractor. I put a boom on the back, hooked up a chain and started lifting and moving things like old car axels, car frames and I-beams. That old tractor could lift just about anything. There was an old house nearby that had burned down and had been removed. The old sandstone foundation stones were still there, so we fired up the old Allis and soon we were building a formal garden out of giant sandstones. I remember trying to move those stones with a pry bar. It was back breaking. The Allis didn’t care. It could lift anything.

That first winter I was thrilled to be able to burn wood for heat. That meant that I had to drag trees out of the woods. Once more, the old Allis came in handy. I could use it to pull trees in the direction I wanted them to fall, and I could also use it to drag the whole tree back home to cut and split. One day, I got an old brush hog to attach to the back of my tractor. Again, the world opened up before me. I started reclaiming sections of my hay field that had been allowed to become overgrown with multiflora rose. Each pass I would get a little braver, and with every pass I cut a little deeper into the woods. Soon my tractor and I were inseparable.

Every man deserves a tractor. Every woman deserves a tractor. Everyone should at least once in their lives get to experience the exhilarating feeling of lifting 1,000 pounds into the air and moving it. And the sound… the sound of a tractor is unique to the model. My neighbor told me he could identify every tractor on our hill by sound alone. He was right. He can now tell exactly which tractor I’m on based on sound alone. That’s right. I now have more than one tractor. I have five. Used to have six, but I had to cut down. By the way, tractors are addicting.

The Problem with Your New TV

This is a public service announcement. Movies and TV shows are being destroyed by your brand new TV and only you can prevent this catastrophe.

Have you or your loved ones sat down to watch your favorite movie on your brand spankin’ new 80 inch “super ultra max HD+ special edition” TV just for it all to look like it was shot with your grandparents home video camera? Have you found yourself at the local watering hole and look up to see that all of the big screen televisions playing a re-run of Two and a Half Men and it instead looks like footage of Charlie Sheen caught by TMZ?

The problem is that your new TV is trying to fix something that isn’t broke. This effect has been given the affectionate nickname the “soap opera effect” and it’s butchering the way movie and TV directors intended their works to be seen.

It all boils down to motion. According to research done at Trinity College Dublin, it was determined that for the human eye, life is a movie running at around 60 fps (frames per second). Our eyes and brains expect something very different when we’re watching movies. Since the beginning of cinema, almost all film has been shot at 24 fps. Most modern TV shows shoot in the same manner. When the camera records action in this way, it gives the shot a subtle motion blur effect which makes it aesthetically pleasing to the human eye.

Directors have been fighting tooth and nail to get their movies or tv shows to look the way they intended long before this epidemic. Broadcast TV already does some work to the original footage which was shot at 24 fps, conforming it somewhat to fit their broadcasting settings, but it wasn’t until just recently that it got this bad.

With the rise of Smart TVs, a TV is now practically a computer and comes jam packed with a variety of features. The feature that is to blame for all of this has many names, but most of the time is called “motion blurring.” It allows the TV to insert additional frames to simulate a higher frame rate and for some reason that setting is the factory default when you turn on your TV for the first time. So that’s why most bars and restaurants with TVs have this problem. They get the TV out of the box, hang it up and think they should be good to go, when in fact they’re probably display an image filled with more fake frames than real.

Although it can affect the image of a movie or TV show dramatically for the worse, it can be quite impressive for things such as sports broadcasts. Football games and other sporting events are shot at a higher frame rate, and adding those additional “fake” frames allows the image to look crisper and tricks your eyes into feeling like you are at the event.

I guess it’s more of a personal problem I have with all of this. Ever since I was a kid, it bothered me when I’d shoot a short film on my parent’s camera and it never looked like a “movie.” Once I learned that the illusive “film look” was primarily frame rate, it changed everything. Now when I see modern technology strip that “movie magic” away, it annoys me, probably more than others.

So what did we learn today?

Don’t let your kids see Star Wars for the first time and instead of it being a magical experience, it looks like an awkward home video of a guy talking to a green frog puppet. Don’t watch the first season of House of Cards on Netflix and have it feel like you binge watched hours of CSPAN. Watch movies and TV the way and it was intended, with the motion smoothing turned off!