Walking to the office from the parking lot this morning, I thought about what a beautiful day it is…the sky is such a pretty blue, the temps are very pleasant, the birds are chirping and the Cicadas are gone! It’s hard to believe that the 4th of July is just around the corner and summer is almost half over. I don’t want it to end. Summer is my favorite!

As a kid, many of my summer memories were made at Benwood pool. How I loved to swim! Most days were spent there. I also frequented the Benwood-McMechen Library. They always had a summer reading program of which I enjoyed being a part. I think I read every Judy Blume book I could get my hands on. The evenings were full of riding bicycles with friends and catching lightening bugs in the back yard after dark. And then there were the carnivals. My dad took me to every carnival in the area – the one at John Marshall in Glen Dale still comes to town every year. And I would be remiss if I didn’t mention the Marshall County Fair. We NEVER missed a fair. July 4 was always spent in the parking lot at Hills Department Store waiting to see fireworks. I loved the popcorn and the Icees they used to sell in the lobby of the store. 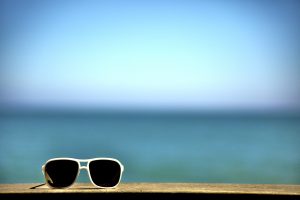 When I became a teenager, I still spent a lot of time at the pool, but the things my friends and I looked forward to the most were the “Park Dances” and fair and festival season. We were such social butterflies. The St. Jude Festival, the McMechen Fireman’s Festival and the Italian Festival when it was still on Market Street were the favorites. All we did was stand around, watch people and talk…nothing that couldn’t have been done anywhere, but there was just something about being at those places that made it more fun. Once we had driver’s licenses, we added cruising to the mix. I didn’t have a car, but I have very vivid memories of riding around in Carla’s red Chevette and Kim’s brown Escort. What fun we had!

Now that I’m an adult, summer remains my favorite time of year. I love the heat and I am still spending as much time as I can by the pool, only it’s my own. There’s usually a vacation or two in there along with a free concert in one of the various venues throughout Wheeling. I love walking on Wheeling’s trails, lounging outside with a good book, taking in a motorcycle ride or a cruise in the Corvette with the roof off. It seems like life slows down just a bit so we have an extra minute or two to take it all in because it really seems like it doesn’t last long. Before you know it, we will be swapping out the shorts and flip flops for jeans and sweatshirts and thinking about making a Christmas shopping list. Until then, I am going to enjoy every minute of my favorite season. Now, pass me the suntan lotion, please. 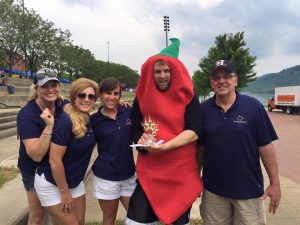 This past June 4 marked the 15th anniversary of the Wheeling Feeling Chili Cook Off, and my second year as the dancing chili. Representing Wheelhouse as Mr. Chili for the second year in a row is a great honor that I take seriously.

I debuted as Mr. Chili during last year’s chili cook off and took home the coveted Mr. Hot Sauce award. My goal this year was to defend my title. In order to do that, I had to pull out all the stops. I needed Mr. Chili to come to life. He needed more Chili-Humanoid features to make him more like a giant cartoon that danced right off the celluloid of a Merrie Melodies short and into the hearts of every chili connoisseur at Wheeling’s heritage port.

Thanks to the good people at Stages, I was able to find everything I needed to help accessorize my chili costume and make my idea come to life. I didn’t have time to call Stages myself. I was too busy practicing my elaborately coordinated dance moves. I delegated the task to my loving, caring girlfriend Megan (God Bless her for wanting to stick with this strange chili boy).

Megan: Yes, do you have any items to make a chili costume?

Stages: I’m not sure, probably not…but go ahead. What do you need?

Stages: Okay, we have those.

Stages: Yeah we have those too! This is getting interesting. What else?

Stages: You’re not going to believe this, but we have a red pair and a green pair.

With the costume elements acquired, chili man was finally complete. Putting on all the parts of the costume felt like I was stepping into a second skin (that was probably due to the tights which left my green derriere exposed to the wind out of the back of my giant red chili suit, a chili fashion faux pas that will not happen twice).

What people might not know, is that days before the Wheeling Feeling Chili Cook off when I first dressed in the Mr. Chili costume, I hiked to the top of a large mountain, watch an eagle fly high in the sky and whispered “Let it begin.” This is my ritual to prepare for the Chili cook off, but I digress.

On the day of the cook off, I got into the Chili mobile (a used tan Honda van). I grabbed two buckets of Mary Vandine’s world famous black and gold chili, a portable karaoke machine and Wheelhouse Creative’s custom-built Ring of Fire game show wheel. Wheelhouse Creative designed the ring of fire to challenge chili cook off goers to a hot sauce shot challenge to win prizes like tickets to summer concerts and amusement parks. I was the Bob Barker (or I guess Drew Carey) of this super spicy show case showdown. I sang. I danced. I perspired. I laughed. I cried, and I got to meet some interesting characters who descended upon the waterfront as the chili cook off went underway. I also got to see Wheelhouse Creative do what they do best and come together as a team. I was but a humble mascot, the real heroes were the great men and women of Wheelhouse who were slinging chili, hot sauce tortilla chips and keeping the true spirit of the Chili Cook off alive. (Special thanks to DJ Josh for supplying the music and Michele Rejonis for keeping me hydrated.)

At the end of a long day of replacing words to party songs with chili phrases, handing out prizes, and churning out tiny cup after tiny cup of homemade chili to chili officiandos, the votes were tallied for which cooks had the best chili and the winners for all the different categories of the event were gathered by the waterfront to be called down for their trophies. I’m sad to say that I did not take home the Mr. Hot Sauce award this year. A man in a Gumby shirt beat me, but I’m proud to say that I did my part in helping the Wheelhouse team win the Best Booth Award. It’s an award given to the booth with the best flare and the greatest sense of showmanship, which I believe couldn’t have gone to a better group of people because having a sense of style and knowing how to put on an amazing event is what Wheelhouse Creative is all about.

When the 17-year Cicadas converged on the Ohio Valley a few short weeks ago, I was rather indifferent with regard to their presence. I find them ugly and noisy, but they’re here. OK, whatever. Its’ not like they bite or sting or are spider-like. I don’t have many Cicadas around my house probably because there aren’t many trees in my neighborhood and we dug up our yard about eight years ago when we installed an in-ground pool, disturbing the Cicadas that burrowed during their previous visit 17 years ago. So, for the most part, I really haven’t been bothered by them. Until yesterday.

During my lunch hour, I decided to run some errands. Driving down the street, every two seconds a Cicada would hit my windshield. And another. And then another. Those Cicada guts don’t clear easily with windshield washer fluid! When I got out of my car to take my clothes into the dry cleaner, I was dive-bombed by what seemed like dozens of the insects. Upon entering the building, the clerk told me they had been flying in as people opened the door to come and go. As I was getting back into the car, I was pelted again by many. It’s like they blindly fly into anything that happens to be in their path. Can they not see with those big, red eyes??? As I looked behind me while backing out of the parking lot, I noticed I wasn’t alone in my car. Staring back at me from my upper arm was…yep, you guessed it. The friendly neighborhood Cicada. It’s like being in a bad horror movie! You just can’t escape.

I was 27 the last time the Cicadas were here, but I don’t recall there being so many or any incidents like what I’ve recently experienced. Yes, they were flying around, but I don’t remember being randomly biffed in the head by them. I recall that they made noise, but I don’t remember the screech being so deafening in places. (As I write this, one of my colleagues just screamed as there is a locust in the office.) Maybe I am not as indifferent about the presence of the Cicadas as I once thought or maybe I am just not as tolerant as I was in my 20s. I must admit I will be glad when they’re gone.